Diabetes: One Family’s Fight for “Normal”

Tierra Bergh, a busy mom of five, still vividly recalls this moment from nine years ago: “Maleki woke up, looked at me, and asked why we were in the hospital.”

Her son Maleki, then 3 years old, had arrived at Lucile Packard Children’s Hospital Stanford that morning in March 2006 practically unconscious. Thanks to a quick response by Darrell Wilson, MD, chief of pediatric endocrinology and professor of endocrinology at Stanford University School of Medicine, Maleki began treatment for type 1 diabetes. Tierra and her husband, Michael, suddenly found themselves in a new world of finger pricks and insulin injections.

Maleki and his family spent five days in the hospital, where they also learned about a new test for antibodies that could help predict whether a child will develop type 1 diabetes.

There was a five percent chance that one of Maleki’s siblings would also have the disease. Against the odds, the Berghs learned that Maleki’s sister Marae also carried the antibodies.

As the family learned to care for Maleki and adjust to their new “normal”, they gratefully relied on Wilson and his colleague, Bruce Buckingham, MD, professor of pediatric endocrinology, for constant advice and support.

In 2010, says Tierra, the family was at a wedding when she noticed Marae was going to the bathroom a lot and was very thirsty. Tierra used her son’s sugar meter and saw that Marae’s blood glucose level was at 403 — nearly double the threshold for diabetes. 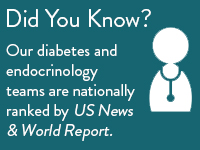 “I did what most moms would do — cried for a minute — and then I called Dr. Buckingham,” Tierra recalls.

The Berghs credit the team at our hospital for helping their family not only survive, but thrive, even as another child, 6-year-old Jaeda, also tested positive for the antibodies.

“We always carry a lunch box filled with diabetes supplies and food for instances of low blood sugar,” Tierra says. “The kids are used to checking their blood sugar 15 times a day and giving themselves insulin injections six times a day, even in public. It’s second nature for them now.”

Today 12-year-old Maleki pitches and plays shortstop for a traveling baseball team, and has served as a youth ambassador for the American Diabetes Association.

Marae, now 9, has fallen in love with horseback riding. “It’s very therapeutic for her,” Tierra says.

The family is committed to helping find a cure for diabetes. Maleki and Marae recently attended a special summer camp where they participated in a study led by Buckingham. The campers — all children with diabetes — were outfitted with continuous glucose meters that allowed medical staff and researchers to monitor each child remotely and study the effectiveness of an automated insulin system.

And even though the Bergh family moved to Idaho last year, they continue to participate in studies at Stanford, returning to the Bay Area for tests and scans.

“These doctors do amazing things,” Tierra says. “I only hope that one day there will be a cure.”

This article first appeared in the Spring 2015 issue of the Children’s Fund Update.

Champions for Children: Putting the Fun in Fundraisers

Toddler from Chico One of the "Biggest Saves Ever"