Fighting Brain Cancer with the Help of Stanford Basketball

“In a season that would typically be defined by wins and losses, the most important result is a ‘Ty.’”

Earlier this month, 11-year-old Ty Whisler stood before the Stanford men’s basketball team as the honorary captain for their rival game against Oregon. He delivered a pregame speech to the players, a group with whom he has a special bond. Reading from posters he created, Ty recited words that have inspired him over the past year and a half as he underwent treatment for cancer at Lucile Packard Children’s Hospital Stanford: “Hope, dedication, strength, courage, faith, love and fight. I’ve fought this last year, so tonight you guys need to fight!”

It all started on his first day of fourth grade in September 2016. Ty Whisler met his new teacher, caught up with his friends and suited up to play goalie in his first afterschool soccer game of the season. Ty was rushed to the emergency room after he was kicked in the head. His family feared he may have a concussion, but a CT scan revealed something much more severe — Ty had a ping pong ball-sized brain tumor in the back of his head, next to his brain stem, diagnosed as medulloblastoma, a rare and fast-growing cancer that was located in the cerebellum.

Ty underwent an initial craniotomy surgery to remove a portion of the tumor just days after his diagnosis. Afterward, Ty’s parents, Alan and Jill, began researching options to treat the portions of the tumor that still remained in their son’s body. They found the neuro-oncology team at Stanford Children’s Health, which is led by Paul Fisher, MD, who serves as chief of the division.

At Packard Children’s, Ty was enrolled in a clinical trial that is investigating targeted approaches for the treatment of medulloblastoma, in which he underwent six weeks of radiation therapy followed by seven months of intense chemotherapy. It was during this time that he established an unbreakable bond with the Stanford men’s basketball team.

While he was in treatment, Ty was selected as a “patient hero” for the 2017 Stanford University Dance Marathon, an annual event hosted by Stanford students that fundraises for various organizations, including the Bass Center for Childhood Cancer and Blood Diseases at Packard Children’s. The dance marathon coordinators and the Lucile Packard Foundation for Children’s Health paired Packard Children’s patient heroes with different Stanford sports teams. As fate would have it, Ty was matched with the basketball team. Ty recounted their first meeting to KTVU:

“On this random day in the hospital, these four dudes just came in, and they gave me this ball with all of these autographs on it! And I said ‘What are you guys?’”

“The players came and they all just sat right next to him, and it was like love at first sight. Ty slept with the ball every night.”

The players continued to visit Ty while he was in the hospital, sometimes even accompanying him to lab tests and other appointments. And when he was feeling up to it, Ty would attend their games, practices, team meals and other events.

“What I’m most impressed by is that Ty has found a way to include his love of sports into this huge interruption in his life,” said Samantha Ingerick, a pediatric neuro-oncology nurse practitioner who is involved in Ty’s care. “Chemotherapy, radiation and surgery are huge events that turn your life upside down, and he has found a way to get through it by using what he loves most in order to make it tolerable, in order to give him strength and in order to make it so he’s not alone. He has had the Stanford team with him throughout the whole thing.” 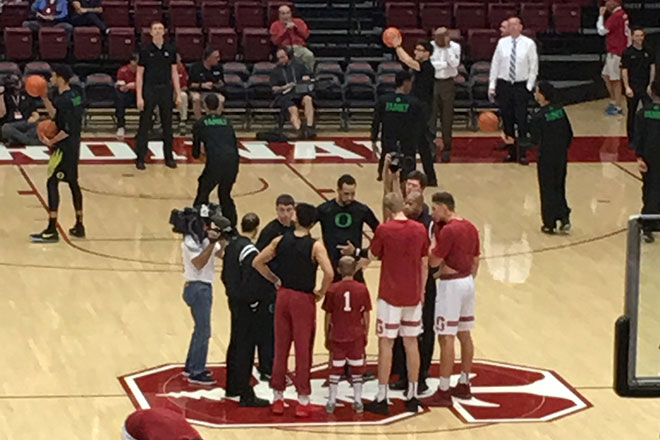 Today, Ty is six-months in remission and is thriving as he adjusts to life back home in Tahoe City, CA. He returns to the hospital every three months for MRI scans, labs and a lumbar puncture procedure to check that there is no tumor growth in his brain or spine. And when he is in Palo Alto, he sees the Stanford men’s basketball team as much as he can.

Earlier this month, Ty’s MRI scan showed improvements: decreased size and decreased enhancement to the residual mass where his tumor was, which suggests less cellular activity there and a lower chance that his tumor could grow again. As Ingerick pulled up the MRI scan on the computer to deliver the good news during Ty’s appointment, there was a knock on the door — senior forwards Michael Humphrey and Dorian Pickens were there to surprise him with his favorite ice pops and high fives. 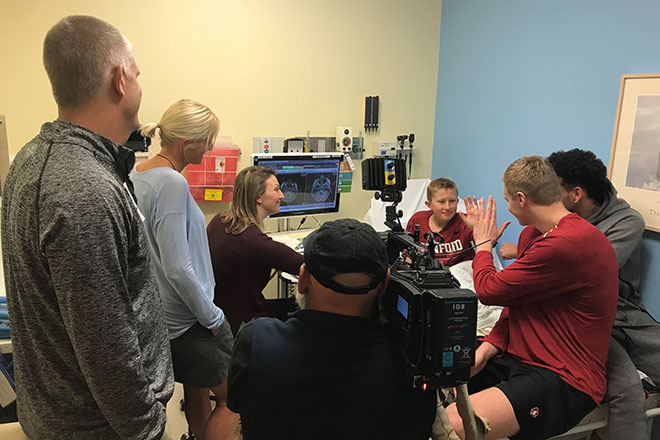 “It’s incredible. It almost brought tears to our eyes,” Pickens told KTVU. “It is great to see someone who’s dear to our heart like him have such great news.”

Ty’s love of sports doesn’t stop at basketball. He is also a huge baseball fan. His favorite team is the Chicago Cubs, and Anthony Rizzo — a childhood cancer survivor himself — is his favorite player. During Ty’s treatment, the Cubs played in the World Series and had their first win in 108 years – a victory Ty predicted all season, his family said. He requested that his radiotherapy (RT) mask, a mesh plastic mask immobilization device used to keep the head and neck still during radiation, be made to look like Rizzo. Ty’s wish was his radiation therapists’ command, and they artfully decorated the mask to look just like the player’s first baseman helmet.

After Ty finished treatment, Jill posted a message of thanks to the Anthony Rizzo Family Foundation Facebook page. A friend of the Whislers’ friend connected them with an opportunity for Ty to meet Rizzo at Wrigley Field. When the pair met, Rizzo remarked “Hey, I’ve seen that mask before!” and autographed it. 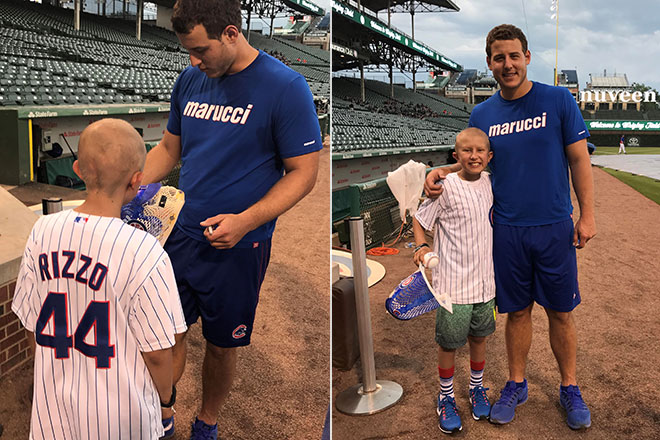 The connections Ty has made are a testament to his vivacious spirit. “It always makes it more fun,” senior Michael Humphrey told KTVU of having Ty around. “It lightens the mood and it’s a much better environment when he’s out there.” 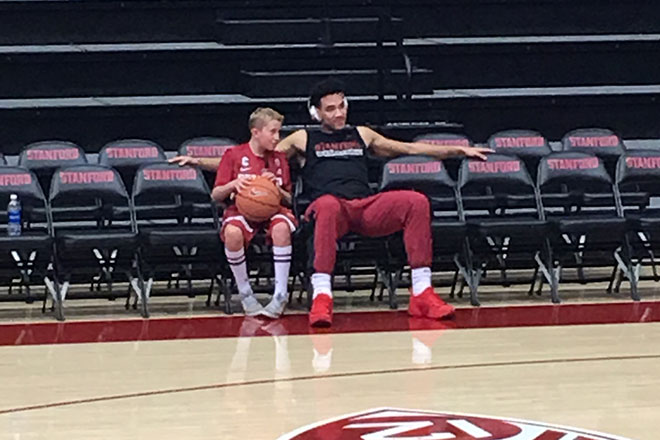 “We are so grateful,” Jill told KTVU. “The players don’t realize how powerful the healing aspect has been for Ty, letting him believe in himself and stand back up again and fight.”

For the players, the feeling is mutual.

“It shows how great of people they are that they’ll allow people like me and Dorian to come into their lives and try to help them out,” Humphrey said. “But I think really they’re helping us out more than we’re helping them.”

This story originally appeared on the Healthier, Happy Lives blog.

BACK TO BLOG
How You Can Help
Show your support for our patients and families by making a gift today.
Donate now
Share Your Story
Share your connection to Lucile Packard Children's Hospital Stanford.
Share now