Solving the Mystery of Prematurity

Working quietly in his lab, a statistics researcher analyzes the levels of pollutants in California’s Central Valley. Across campus, an immunologist looks at the reams of bacteria that reside in the human digestive system. And in another lab, a team of bioinformatics postdoctoral fellows tracks thousands of entries on biological data and gene types.

They are among the more than 140 specialists in obstetrics, statistics, sociology, microbiology, public health, nutrition, genetics, immunology, and other diverse fields taking part in the March of Dimes Prematurity Research Center at Stanford, a bold new enterprise to solve one of medicine’s most difficult challenges—premature birth.

A global study released in October shows that prematurity is now the leading cause of death globally to newborns and to children under 5 years of age. Worldwide, about 15 million babies are born prematurely each year, and more than 1 million die within their first 28 days. Among the more than 4 million babies born in the U.S. each year, one in eight arrives too early.

The earlier a baby is born—at less than 28 weeks gestation in cases that are considered extremely preterm—the more complications the child will likely face. The cost to society is enormous.

Despite its frequency and impact, the causes of premature birth remain elusive, and decades of research have done little to reduce its occurrence. Only small inroads have been made in understanding the multiple factors behind its origin and in developing strategies to prevent early births.

“We need a different way of thinking that removes any preconceptions of what causes a premature birth and where and when to intervene,” says principal investigator David Stevenson, MD, the Harold K. Faber Professor of Pediatrics.

“The problem will not be solved by taking a traditional silo approach, with researchers focused on one discipline, one problem, or one perspective at a time,” adds Stevenson, who is also director of the Johnson Center for Pregnancy and Newborn Services at Lucile Packard Children’s Hospital Stanford.

The prematurity research center is based on a new concept called transdisciplinary research, which focuses on a single issue from multiple starting points—creating promising collaborations that link experts who may not normally interact. The system uses diverse perspectives to find new solutions to a problem that has not improved in the last 30 years.

“Prematurity is not one thing but a broad category of processes,” says Wise. “A transdisciplinary approach allows us to create a new common language to explore a complex issue that has so far eluded a solution.”

The center, launched in 2011 with $20 million in funding from the March of Dimes over 10 years, is the first of its kind in the country and the first of five centers planned for academic medical centers across the U.S.

Its goals are to:

“There has been progress in identifying external risk factors, but we still don’t know what makes them risk factors,” says Stevenson, who is also senior associate dean for maternal and child health at Stanford Medicine. “What is it about an influence like stress that causes changes in the mother’s biology? We want to define the processes responsible for these changes and then target those molecular or cellular pathways.”

From environmental risk factors to fundamental signaling pathways to the genetic interactions between the mother and fetus, the center’s teams look at prematurity from all angles. Each week, about 30 researchers, postdoctoral fellows, and students gather at “Preemie Wednesday” sessions to discuss ideas, make presentations, and share their progress.

“The room is full of people who are thinking creatively,” says Cecele Quaintance, administrative director. “They’re eager to talk about what they are doing and to take part in the larger network.”

Shaw describes the process as “a scientific soup, putting together mountains of data and coordinating top experts in seemingly unrelated fields. Then we plan to parlay that into implementable steps.”

Though premature infants in the U.S. are more likely to survive—and thrive—than those born elsewhere, infant mortality rates are still higher here than in most other developed countries. In one recent study, the U.S. ranked 173rd in the world for its rate of preterm births, on a par with Somalia, Myanmar, and Mali. The high infant mortality rate is directly related to the high numbers of premature births, with a disproportionate number occurring in mothers from underrepresented minorities and low income.

“We are looking at health inequalities and health disparities in the larger, global setting,” Wise says.

The center’s transdisciplinary approach means that investigators and clinicians collaboratively determine how best to implement research findings as bedside treatments and to evaluate strategies for prevention and diagnosis. Together, they are compiling data on social, biological, and clinical factors that reflect prenatal and obstetric health, and illuminate the contributing factors to preterm birth.

“We have an advantage because vital data sets already are in place, but it takes time to create a complete picture of vital phenomena,” says epidemiologist Jeffrey Gould, MD, the Robert L. Hess Professor in Pediatrics.

As director of the California Perinatal Quality Care Collaborative, Gould oversees a network of more than 130 California hospitals that provide intensive care to newborns. He uses the statewide data to identify which mothers and babies are at high risk for poor outcomes and to bridge the gap between research and clinical care.

“Since prematurity is not homogenous, we are looking at areas that show increased incidence,” Gould says. “We are searching for what’s driving the phenomenon. Once we find the drivers, we can find a solution.”

This partnership with the March of Dimes recognizes that we are willing to try new things and solve problems creatively,” Stevenson says. “Team science is about making new connections, which Stanford is known for, and the issue of prematurity has introduced a sort of inspirational glue.”

Some causes and risk factors for preterm births have been established, such as smoking, drinking while pregnant, high blood pressure, and diabetes. But these insights have not led to widespread preventive measures or reduced the numbers of extreme preterm births. There is such a wide range of possible factors—biological, behavioral, social, physical, and environmental—as well as their interactions, that finding one starting point is most unlikely.

Instead, the center’s focused attention is pointing to a more integrated, preventive approach. Work taking place at the center is providing deeper insights into the inflammatory and infectious processes that appear to be harbingers of premature births, and early findings have helped to introduce preventive protocols.

Other researchers are looking at the relationship between genetics and the environment, changes in the mother’s microbiome (the microorganisms living in the human body), and the interval between pregnancies.

“In some ways, the technology is not the hard part and the data are coming fast, or are already there,” Butte says. “The hard part is now figuring out what question to ask. Then we can write the software to answer it.” 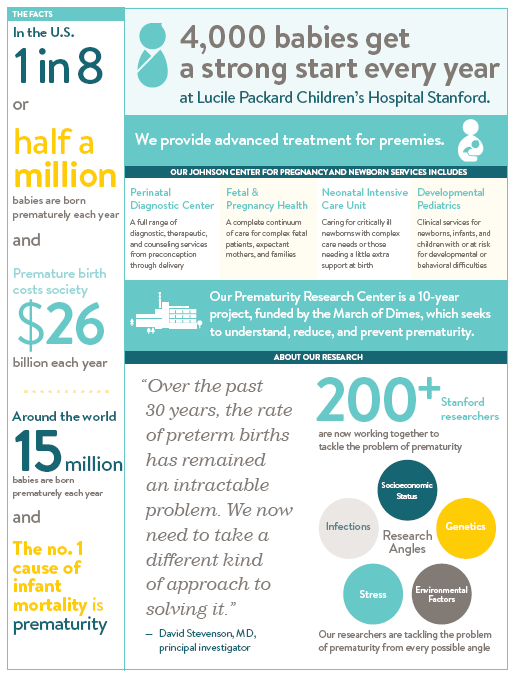 The center and the March of Dimes have already made an impact on late preterm births by introducing guidelines for physician intervention. From 1990 to 2006, the percentage of women whose labor was induced before 39 weeks more than doubled. In addition, many expectant mothers were scheduled for elective repeat Cesarean sections prior to 39 weeks. Because due dates are only estimates, a delivery scheduled for 37 or 38 weeks may actually result in a preterm birth. Meanwhile, the use of fertility treatments resulting in multiple births also pushed up the rate of preterm births.

A national campaign to educate mothers and physicians about the consequences of induced labor has already dramatically reduced elective induced labor at less than 39 weeks. Because caregivers differ in how they support women near the end of pregnancy and in their judgment about when to recommend induction, the campaign established specific, measurable criteria for inducing labor. Changes in the timing and strategy of fertility treatments, which lead to more multiple births, also are helping.

“Nearly every hospital in the U.S. has adopted the toolkit, and the result is that late preterm rates have dropped,” says Druzin. “The situation was fixed by a change in practice. But for extreme preterm births, there has been little improvement. Early preterm is harder to fix: It’s not about delivery, it’s about development.”

Druzin has also been instrumental in implementing new criteria for treating preeclampsia and eclampsia. A task force Druzin chairs has established guidelines on diagnosing and managing these conditions, and the toolkit has been downloaded more than 1,000 times in 48 states and requested by hospitals in Mexico, South America, and Europe. Follow-up data already is being incorporated into additional studies to introduce further improvements.

He predicts that rather than using a single diagnostic test, practitioners will apply multiple factors to create a risk profile that includes income, race, diet, stress, and environmental exposure, as well as the presence of bacteria, inflammation, and genetic markers that may indicate an increased likelihood of preterm birth.

Steps in the Right Direction

As part of a larger consortium, Stanford is leading the way in translating the center’s scientific insights into care that will benefit newborns everywhere and impact health worldwide. The close affiliation of the center’s scientists and clinicians, and its access to the intellectual and technological resources of the entire university, make the promise of transdisciplinary research especially encouraging.

“We have set the groundwork of what team science means,” Shaw says. “We have shared our knowledge with other organizations and will collaborate closely with the other March of Dimes centers. Our role is that of institutional mentor.”

The center’s leaders expect their work to evolve over time as they collaborate with other institutions and incorporate additional areas of scientific inquiry. New perspectives are also likely to arise from fellows and trainees who are developing expertise and building their own research portfolio.

Stevenson adds that the team aims to work with and complement the efforts of colleagues at the University of California, San Francisco, who are beginning to tackle the important problem of prematurity as well.

Druzin predicts that the center will contribute to incremental decreases in premature births, particularly through the development of physician toolkits and public education.

Center investigators are optimistic that within the next five to 10 years, they will have a well-developed picture of the causal mechanisms behind extreme preterm delivery and practical prevention techniques to offer expectant mothers.

“In the past, I thought we might never solve the problem of prematurity,” says Gould. “But now, after three years with the center, we have already made important inroads. I think we are on our way to making significant changes for mothers and babies both locally and around the world.”

After the NICU: Studying Connections Between Prematurity and Development

Right from the Start