Alex Walter, 18, attends the hospital school most days, and you can bet he’ll be wearing some kind of Denver Broncos gear: hat, shirt, warm-ups and even socks. “I’ve been a fan a long time,” said Alex, a Montana native, “and it probably started with my cousins.” His mom, Ronda, says that it might have something to do with spending the first several years of his life in Denver, where Alex underwent treatment for his congenital heart disease, which included several surgeries. Alex came to Packard Children’s at age five and received a heart transplant when he was 11.

Now, his heart is doing well. But, unrelated to his CHD, he was diagnosed at 17 with rhabdomyosarcoma, a soft tissue cancer. He’s been at the hospital since March for chemotherapy and radiation treatment at the Bass Childhood Cancer Center. The treatments leave Alex with little energy, but he is “relentlessly positive,” as mom puts it. He and Ronda are living at the Ronald McDonald House at Stanford.

Last week, as Super Bowl 50 excitement grew, we learned that Alex’s dream was to meet his beloved Denver Broncos, who would be practicing just down the street at Stanford University. On Monday, we posted this to our Facebookpage.

This is Alex, a heart transplant patient, a cancer patient, and the biggest Denver Broncos fan at our hospital. The...

The goal was to catch the Broncos’ eye. Thousands of fans liked and shared the post, tagging Peyton Manning, the Broncos, local reporters, and anyone else to help spread the word.

By the next morning we made contact with Vernon Davis, former 49er and now Super Bowl-contending Broncos tight-end. The photo also caught the attention of Bay Area news outlets, including KTVU’s (Fox 2) Rob Roth and NBC Bay Area, who called the hospital wanting to talk to Alex. Staff and the hospital school devised a plan to surprise Alex, telling him that two TV stations were going to interview him about wanting to meet a Bronco. And during the interview Vernon Davis would walk in and give Alex the surprise of a lifetime!

It all worked according to plan. Check out our behind-the-scenes video of the surprise.

Alex gets his wish!

That special moment when one of your heroes surprises you—the stunned look on Alex’s face at 0:35 is priceless! Thank you again to Vernon Davis and to all of you for making Alex’s wish come true! #SB50

Vernon Davis posted about the visit on his social media. 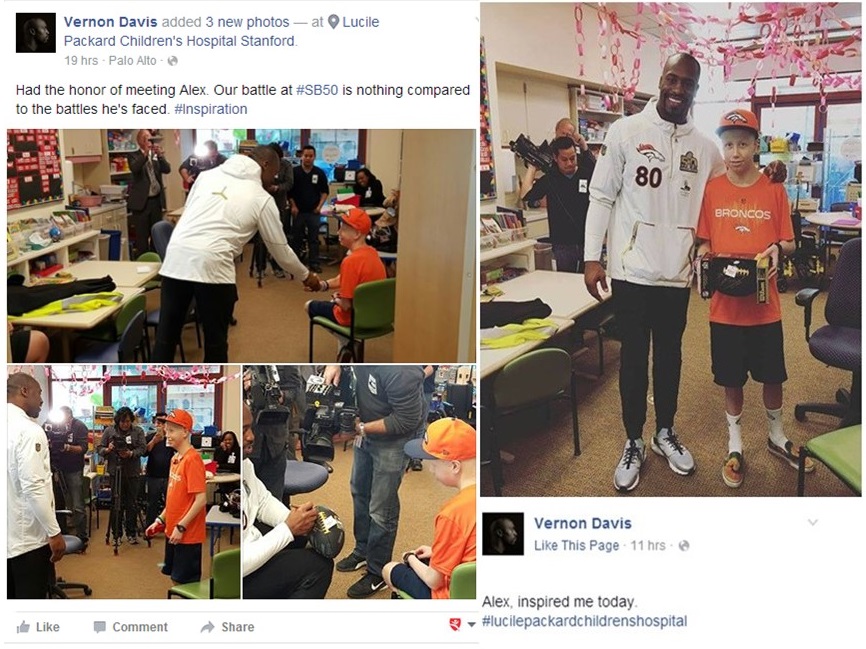 Update: On Saturday, February 6, Vernon Davis returned to our hospital once again, but this time to surprise Alex with a pair of tickets to the big game!

The smiles say it all! Earlier this week we introduced you to Alex Walter, #Broncos superfan and Packard Children’s...

Alex took another heart patient's older brother with him to the game. Many people recognized Alex from social media and the news and even asked to take photos with him!

Hope you're enjoying #SB50 friends, Alex certainly is! Luck to both teams but you can bet we’re cheering on Vernon Davis...

Davis also visited with patients in the hospital school and spent time taking photos with families coming in and out of the hospital. His graciousness, compassion and spirit were felt and appreciated by so many at our hospital, most of all, Alex, who is still a bit shocked by the whole event, but has a big smile on his face.

BACK TO BLOG
How You Can Help
Give hope and healing to more families by donating to the Children's Fund.
Donate Now
Share your story
Tell us how you're connected with our hospital
Share Now
You might also like:

Five Champions for Children who inspired us in 2015